Notice of Findings and Decision for Road Rage 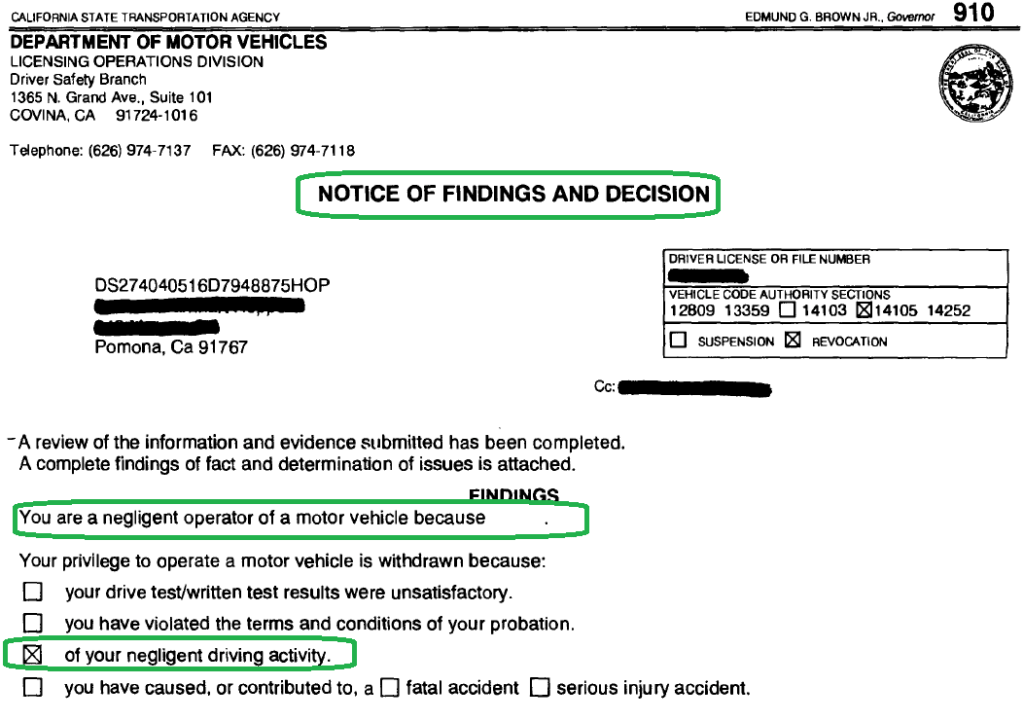 What is a Notice of Findings and Decision following a Negligent Operator Hearing for Road Rage?

The California Department of Motor Vehicles (DMV) is the government agency tasked with issuing the California Driver License to qualified drivers.  Once the driver license has been issued, however, the driver then comes under the watchful eye of the DMV who is then tasked with the responsibility of ensuring that all drivers maintain the skill, knowledge and ability to safely operate a motor vehicle on our public roadways.

An increasingly common event which will cause a driver to be labeled as a Negligent Operator is any involvement in an incident of Highway Violence, often referred to as “Road Rage.”

Road Rage is commonly defined as:

“Aggressive or angry behavior by a driver of an automobile or other road  vehicle which includes rude gestures, verbal insults, physical threats or dangerous driving methods targeted toward another driver in an effort to intimidate or release frustration.”

Road Rage is seated in the emotion of the errant driver and, as we all know emotions can run high on today’s freeways.  Violence, injuries and death are often a consequence of Road Rage.  As a result, the DMV considers Road Rage to be dangerous to the motoring public and will work aggressively to remove such a driver from the road.

If a driver accused of Road Rage elects to defend themselves at a Negligent Operator Hearing, the department must consider all evidence and testimony presented at the hearing.  Once the hearing is concluded, the assigned hearing officer must make a decision regarding the person’s privilege to drive. The hearing officer may:

The Notice of Findings and Decision is the instrument by which the DMV Hearing Officer notifies the accused driver of which choice has been made.  It is common for the final decision to be published about 15 days after the hearing but can take as long as 30 days.  The Notice is sent to the driver through the US mail; which is another reason to ensure your correct address is on-file with the DMV.

Why does the DMV send a Notice of Findings and Decision to a driver following a Negligent Operator Hearing for Road Rage?

The California Vehicle Code specifically mandates that the DMV notify an accused driver of the findings made by a Hearing Officer at the conclusion of any Administrative Hearing.  All decisions made by the hearing officer must be conveyed to the accused driver in writing.

California Vehicle Code Section 14105(a) determines……  “Upon the conclusion of a hearing, the hearing officer or hearing board shall make findings and render a decision on behalf of the department and shall notify the person involved.  Notice of the decision shall include a statement of the person’s right to a review.  The decision shall not take effect as stated in the notice, but not less than four nor more than 15 days after the notice is mailed.”

This particular Notice of Findings and Decision is usually a brief one-page” document that cuts to the chase.

Here is where the hearing officer indicates that a driver has won or lost the hearing. If the Hearing Officer issues an order which suspends or revokes the driving privilege, that means the department has concluded you are a Negligent Operator and that action is warranted to punish you for involvement in a road rage incident.

If the Notice of Findings and Decision identifies a particular period of suspension, the driver must abide by those terms before being reinstated. If the Notice of Findings and Decision indicates that the driving privilege has been revoked or “withdrawn” this means the person is taken off the road for an indeterminate period of time, which usually equates to a minimum of 12 months [there are some exceptions to that rule].

What does a withdrawal or revocation of my driver license mean for me?

If you have received a Notification of Findings and Decision which withdraws or revokes your driving privilege following a Negligent Operator Hearing for Road Rage, this means the Hearing Officer has made a finding that you were negligent and that you endangered the public by being involved in an incident of Highway Violence.

When the DMV issues an order that revokes the driving privilege, it is for an indeterminate period of time.  This means that your privilege to operate a motor vehicle is withdrawn forever, or until the DMV is ready good and ready to revisit the matter.  It has been the general policy of the Department of Motor Vehicles to not re-open such a case for a minimum of 12-months, however, there are instances where the DMV will take a second look after 6-months.

California Drivers Advocates is a team of expert DMV Defense advocates. We represent drivers throughout California when their driver license comes into question with the California Department of Motor Vehicles.

Feel free to click any phone number to call, or simply open a chat window at any time.

Talk to a DMV Defense Expert